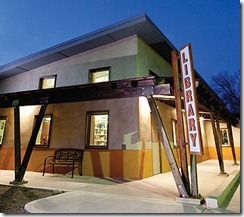 Everyone in town is proud of the Naturita Community Library (NCL). Thanks to tremendous local support and smart design, it is now housed in the largest straw bale library in America. The tiny, isolated town of Naturita, CO, population 665, according to the nomination, “has unpaved streets, a per capita income just over half the state average, and a resource-dependent economy that has cycled through booms and busts.” It sits on the western slope of the Rockies, across the Uncompahgre Plateau from the county seat in Montrose where the main branch of the Montrose Regional Library District (MRLD) is located. The library district, of which NCL is a part, serves some 40,000 Coloradans, but only 2100 live in the western part of Montrose County and get library service from NCL.

In that setting, two NCL full-time and two part-time staffers, living up to the mission of the district library, mount an enthusiastic effort to “educate, enlighten, enrich, and entertain” and “to foster interest in reading and lifelong learning.” Open 57 hours a week over six days, the library continually creates a vibrant and responsive community center for Naturita and the surrounding small towns. There patrons tap into technology, distance education, and broad programming aimed at all. Its innovation in these areas, and so much more, has won the library LJ’s 2011 Best Small Library in America Award, sponsored by the Bill & Melinda Gates Foundation

Posted by Lynnette Phillips at 9:03 AM