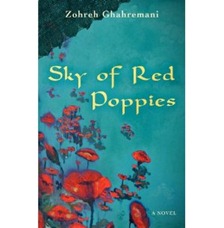 Ms. Ghahremani’s almost lyrical prose gently guides us through a story filled with sorrow and joy taking place in a strict society where a schoolgirl friendship blooms amid the changes of the people surrounding them, of shifting politics, the growing oppositionist activities and even land reforms.

Sky of Red Poppies is a depiction of the strength of the culture, of family and the power of friendship; it is loud but unobtrusive in the telling of the story. This is a heartbreaking love story—love of the land, of freedom and of the people—a bittersweet novel that shouldn’t be missed.

Roya has been sheltered from the politics and strife by a well-to-do and loving father aware of the possible consequences of defying the Shah.

Shireen has seen the cruelties and changes coming about in her country and tries to show Roya what the future could bring.

Jenab is a literature teacher illuminating words and guiding their thoughts.

Zohreh K. Ghahremani writes both in Persian - her native language - and English. Many of her articles and short stories have appeared in US magazines. A long-term immigrant, she draws from her Iranian-American culture and transmits a fresh mixture to her readers. Her work has won several awards, including the 2005 California Stories and first prize at SBWC for best fiction 2004. Her second novel, The Moon Daughter, will be released in 2011.

"Within each of us there's one special story, screaming to come out. Sky of Red Poppies was mine."
Sky of Red Poppies has already started a "buzz" among readers (see Good Reads), and is being circulated among book clubs, university circles, and libraries around the country. At a recent radio interview, the author was asked why has the work of an unknown writer drawn so much attention? To which she responded in the translation of an old Persian poem, "A word that comes from the heart, has no choice but to to settle in another!"

When not writing, Zohreh enjoys painting and gardening. Her art has been exhibited several times in Southern California. You may visit her at http://www.zoeghahremani.com/