The setting of any great noir piece is the filthy underbelly of the polished public. This place is filthy, grimy, bleak, and often deranged. Expect steaming sewer grates, torrential downpours, second-hand-smoke, and nefarious characters. Crime thrives here, and its purveyors are brutally corrupt and extremely adept. Sadly, these roads are lined with condemned buildings labeled 'hope,' 'faith,' and 'charity.' 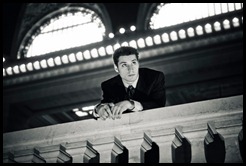 The main character of the noir genre is at best despicable. We are fascinated with his/her moral ambiguity and glaring flaws while hiding our disgust with the same. Dangling from this character's lips is the tell-tale cigarette and the greasy tendril of smoke tickles the street lamp above. Usually this character's life is at stake, and this is almost always due to their own poor choices. We quietly root for him/her and cringe when the baseball bat or crowbar beats their brow bloody. 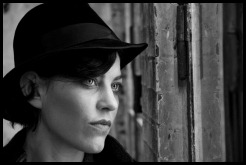 femme fatale. She is sultry, sexy, and manipulative. Her power over the main character is unmistakable and she gently leads him along to meet her own ends. Elegance of speech and brutal double crossings as common as lipstick stains on wine glasses and discarded lingerie. She is deadly, untrustworthy, and 9 times out of 10 the villain.

Throughout the genre of noir, there seems to be a fairly steady stream of misogyny. I'm not suggesting that this "dame-hating" is always aware of itself or that it's a conscious decision by the noir creators, but it rears itself very consistently in each piece. Women are the villains, the burdens, and the childish fools that merely tolerated by the hero. Also the women are always "male-defined." Their behaviors, attitudes, and appearance are constantly pandering to a male audience. I assume that this must be incredibly frustrating for female audiences (it frustrates me and I'm a male). As a result of these male definitions, noir seems to always focus on beautiful women with low sexual standards and no depth of character (other than where it serves plot). Recently I've read that there are some female authors who have reversed the roles in modern noir novels. I hope to read some of them soon so I can report back my findings.

Another theme that has presented itself in my studies is that of redemption. In noir, the detective always arrives after the tragedy has taken place. He is plunged into a world of chaos, where something whole was just shattered (murder, rape, violence, etc.). His job is completely consumed with trying to redeem the unredeemable. Think Batman. Bruce Wayne is haunted by the murder of his parents. He decides to seek vengeance for the rest of his life by "righting" all the wrongs in Gotham. The only catch is that his task is impossible. He cannot change the fact that his parents are dead, nor can he completely succeed in purifying Gotham. He can' t win. The only measure of success he achieves is through putting as many pieces back together as he can. In this way we (the audience) are lead to believe that something has actually been redeemed. We feel better about the injustice when we know how or why it happened, even though it still occurred. Dean DeFino calls this "illusions of order" and "intellectual control." He says that "the story redeems that sense of order and control by (fictionally) exposing its logic, its cause-and-effect chain, how one thing leads to another."

About the Author: My name is Chad de Lisle and I am a huge fan of noir, crime fiction, video game noir, noir comics, film noir, and detective novels. I am 25 years old and only recently discovered my love for the genre. Provo, Utah is my hometown, and I am currently a college student at Brigham Young University. My end goal is an English Doctorate so that I may teach at a university level (Its a ten-year goal, so hopefully I'll get a paycheck by the time I'm 35). I've been married since 2007 to a wonderful woman named Hilary, and we have a miniature schnauzer named Bob Dylan.

The purpose of my blog is to spread my love of all things noir, as well as provide the web with what I believe is the most accurate noir definition to date. I will be posting reviews of the various noir works I delve into, as well as revealing the many impostors the genre is quartering. My findings will be shared through an academic lens, and I hope that many of you will feel encouraged to participate! We must return noir, crime fiction, and film noir to their former places of glory and popularity!

Posted by Lynnette Phillips at 8:36 AM

Email ThisBlogThis!Share to TwitterShare to FacebookShare to Pinterest
Labels: Genre