I just finished a trip backward in time to the Korean War. #BookReview 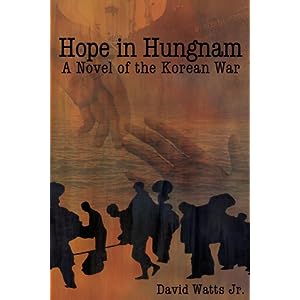 I just finished a trip backward in time to the Korean War. What a harrowing experience!

The bravery and compassion that was detailed in Hope in Hungnam certainly was never hinted at in my history classes...in fact the Korean War was just glossed over!

I was just a small child when my Uncle was sent to the Korean War and it wasn't until I met my husband, who was part of the peace time troops in Korea during the mid 1960s, that I really became aware that there were many stories to be read and heard coming out of that time.

Mr. Watts has created strong well-developed characters to relate his story of people trying to remain human in an inhumane situation. He even chronicled their individual struggles with heart. and was able to actually make me feel the frigid temperatures and wonder at the power of hope and the see strength we all have inside of us.
Posted by Lynnette Phillips at 1:30 PM