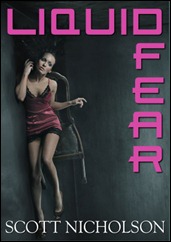 Nicholson’s unexpected prose adds to the uncertainty and anticipation of this suspense thriller where the characters stumble through a cat and mouse game played with the unprincipled Dr. Briggs.

Liquid Fear is just one of the 12 thriller novels Scott Nicholson has written. But he is nothing if not versatile; he has also written short stories, comics series and screenplays. He was a musician in a former life. His work is self-published by Hunted Computer Books.

Scott Nicholson is also a freelance editor and journalist living in the Appalachian Mountains of North Carolina. He has also written hundreds of songs and poems. As a newspaper reporter, he's won three North Carolina Press Association awards. Visit his website for more on his writing, life,and appearances.

Look for the sequel, CHRONIC FEAR, in June 2011. Read the first chapter

Posted by Lynnette Phillips at 3:13 PM