Thank you for spending time with us and sharing some insights into the writing of ‘Signs & Wonders’. If you’re ready I guess we should jump right in.

Lynnette Phillips: What inspired this novella? Is this your writing debut?

Alex Adena: I’ve written for the stage as well as a few screenplays, but this is my first novella. “Signs and Wonders” actually started out as a screenplay. I wanted to write a story about the nature of faith and what happens when you begin to doubt everything you’ve been taught. This story takes that to an extreme – what happens when everything in your life has been a lie and you have to start over from scratch?

LP: Some authors have told me that they build their characters 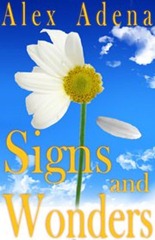 based on people they know. Is that how Annie Grace came to be? Or was there a formula you followed for character development? How did you come up with the characters in Signs and Wonders?

AA: Annie Grace isn’t based on a real-life person. The idea for her came when, out of curiosity, I watched a few minutes of Benny Hinn’s program. That’s when the idea came to me: What if a faith healer –- one who knew their act was a complete con – discovered they really COULD heal people? I knew my faith healer would be a woman because it’s an area dominated by men and I wanted to explore something new. So once I had this strong Texas woman, I thought it would be interesting to pair her up with a slightly older Latino man. Not as a love interest, but as a substitute father figure. That’s how Ernesto came to be. I did have a few actors and actresses in the back of my mind as I wrote some of the minor characters, which is a trick a lot of writers use.

LP: Do you maintain a writing schedule? When you pick up the pen do the ideas just seem to flow?

AA: A lot of my writing during the past few years has been done during furloughs from work. We would have to take a week off, unpaid, so I would stay home and write. That’s how “Signs and Wonders” got its start this spring – probably half of it was written during that furlough week. After that, I set a goal to write at least an hour every day until it was completed.

LP: Do you have a favorite genre or style (short stories for example) that you you feel more comfortable writing?

AA: I’m definitely more comfortable writing novellas or short novels as opposed to epics. I’m never going to write 800 pages. I’d get bored and I think the reader would get bored. Until “Signs and Wonders” came along, I wrote material that was pretty edgy. But, you know, there’s a lot to be said for writing something that you can show your mother! Good stories can be told without a single word of profanity. My next book will be a sequel to “Signs and Wonders” and then I plan to write a family friendly romantic comedy.

LP: Is there a particular genre, maybe mystery or a who-dun-it,that you would like to try your hand at writing?

AA: Someday I’d like to give science fiction a shot, something in the style of Philip K. Dick.

LP: You claim to be a “user of nom de plumes”…why is that? When do you use them?

AA: Authors have to market themselves these days, especially if they self-publish, so I wanted a pen name that was Google-friendly. My birth name (Jeffrey Bruner) is also the name of a college professor in West Virginia, so I created Alex Adena. Search for Alex and the only thing that pops up is my blog and Facebook page.

LP: As an aficionado of Alfred Hitchcock do you have a favorite Hitchcock movie? Do you watch old reruns of his television show? (Even when I was very young I loved the way he could supply us with an off-the-wall mystery every week and have the culprit dealt [not always by traditional punishment measures] with in so short a time.)

AA: I never got into the television show, but I’ve seen all of his films. My favorite is definitely “Rear Window,” with Jimmy Stewart and Grace Kelly. The dialogue really crackles and the filmmaking, the technical side of things, is extraordinary. I never tire of seeing the scene known as “The Kiss,” when the characters meet for the first time. Hitchcock also created such an extensive body of work that a lot of films get overlooked. “Shadow of a Doubt,” with Teresa Wright and Joseph Cotten, is a real masterpiece about good and evil, all set in a quaint California town. It’s definitely worth watching if you’ve never seen it.

Thank you Alex…”Rear Window” is one of my favorites too; Raymond Burr was great as the husband. I’m going to have to take another look at “Shadow of a Doubt” though; I guess it’s been too long since I watched it. I don’t have a lot of memories of movie except that Teresa Wright was very young.

See the review of ‘Signs & Wonders’ now available on Amazon.com

Posted by Lynnette Phillips at 6:39 PM