I don't believe  I did this review in 2011! C J asked that anyone who had reviewed Snake Skin to please post it on the site for a 7 book thriller collection whose proceeds will be contibuted to charity (http://amzn.to/SpgqCX) called Adrenaline Rush: 7 High Octane Thrillers, so I thought I'd post it here as well. 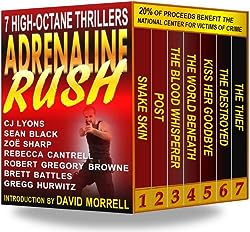 Author CJ Lyons shows her command of the craft in Snake Skin, the story of Supervisory Special Agent of the FBI Lucy Guardino heads the Sexual Assault Felony Enforcement Squad/Crimes Against Children (SAFES/CAC) detail in Pittsburgh. Published by Create Space and released January 19, 2011, Snake Skin shows an artist at her best. The characters are detailed and rooted in reality, the plot tense, gripping and rapidly paced.

Lucia Theresa Guardino was recently promoted and moved her family from Virginia to Pittsburgh. As if the stress of her job and the efforts of trying to insulate her family from the realities of her what she does and sees everyday aren’t enough her daughter, Megan, 12, doesn’t plan to let her Mom off easy for uprooting her and making her leave her home and friends. Ahh, but then there’s her handsome patient husband psychologist Nick Callahan who is never knocked off his stride.

Lucy’s newest investigation is the disappearance of 14 year old Ashley Yeager from the home she shares with her image conscious divorced mother. She understands the Ashley would want to leave a life where you felt like a stranger to your own cold parents—they don’t know anything about her life they’re so self-centered. But did she leave of her own accord or was she forced?

As Lucy traces Ashley’s steps and activities for clues she also must deal with feeling like a stranger to her own family, much like Ashley must, a ruthless and devious reporter who will go to any lengths to get her story and the local law enforcement agencies who want to be in the spotlight as much as they want to solve the case.

CJ Lyons, as a pediatric ER doctor, has aided police and prosecutors with cases of child abuse, rape and homicide and acted as a crisis counselor and victim advocate.

Ms. Lyons first novel, the award winning LIFELINES became a National Bestseller as well as being the first in her Angels of Mercy series. Her award-winning, critically acclaimed Angels of Mercy series (LIFELINES, WARNING SIGNS, URGENT CARE, and CRITICAL CONDITION) is available in stores now.

Currently she’s working on a suspense series coauthored with Erin Brockovich. To learn more about CJ and her work, go to www.cjlyons.net

View all my reviews

Posted by Lynnette Phillips at 11:17 AM