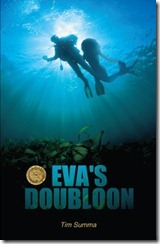 Tim Summa doesn’t consider himself an author but a scuba diver. After experiencing the agile evolution of the adventure and the detailed characters of Eva’s Doubloon, he needs to realize he’s both. Tim Summa’s debut novel, Eva’s Doubloon, was released by Outlook Press January 31, 2011.
The book opens with the passing of Maggie, Ethan Day’s wife and him moving to a remote island paradise in the Bahamas to mourn her in solitude. He goes to his private beach only to find some extremely menacing non­‑mythical mermaids claiming the beach as their own. One in particular is very possessive of the beach…enough so that she engineers a couple very frightening ‘accidents’.
Another mermaid, Eva, finally intercedes and attempts to make amends by paying for the damages to Ethan’s fishing boat with a gold doubloon unknowingly putting Ethan’s in life in danger.
Ethan finds himself threatened by a merciless collector’s henchmen determined to obtain the invaluable coin by any means necessary and his paradise destroyed as his life spirals out of control.
Tim Summa, a former Navy Search and Rescue Swimmer and Anti‑Submarine Warfare Specialist, admits he wrote this novel in an attempt to stop the ideas from flashing through his mind and keeping him from sleeping. After outlining eighteen chapters and writing four chapters he knew he had to finish the story.
Tim Summa lives in Kansas City, Missouri with his wife and family with the sequel to Eva’s Doubloon on his computer.
Reviewed by Lynnette Phillips, Avid Book Reviews
Posted by Lynnette Phillips at 1:24 PM