I recently found a list of mystery books on the Internet that have a genealogical theme. In order to narrow it down, I picked authors, whose books were written since the year 2000. That's not to say older books are not as compelling. It just means that these newer books will be easier to find if your interest is piqued. It is always helpful to have a list of authors to draw from that covers a particular subject of interest. 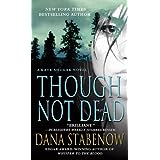 Dana Stabenow's series on Alaska was my motivation. Her 2011 book, Though Not Dead, is the second time she has delved into the genealogical background of her characters in an effort to give readers a clearer understanding of Alaskan history. I loved the book, and I highly recommend her Kate Shugak series.

One series of mysteries came out in 1997. The main character is a historian and genealogist for a small town on the Mississippi River in Missouri. She is married with two children. The first book of this series by Rett MacPherson, is Family Skeletons, and it has Victory (Torie) O'Shea looking into a client's WWII ancestors. These books are cozies with a family history theme.

Sarah Stewart Taylor began her Sweeney St. George mysteries in 2003. Her character is a single college professor, who focuses on cemeteries and gravestones and the mysteries that they conjure. In the first book, O' Artful Death, Sweeney finds an intriguing statute at a gravesite and decides to investigate its background. The stories take place in Vermont.

Fiona Mountain began her 2-book series in 2002. Her main character is thirty-year-old Natasha Blake, an ancestor detective and genealogist in England. Her curiosity comes naturally, since she was abandoned soon after her birth and knows little about her own family history. In Pale as the Dead a man, whose lover has disappeared and is somehow linked to an artist/poet of the 1860s, hires Natasha to find her.

Dan Waddell writes more non-fiction than fiction. His book Who Do You Think You Are? should be familiar to anyone who has seen the PBS series of the same name. The show traces the family history of celebrities. However, in his 2008 book The Blood Detective, he introduces Nigel Barnes a genealogist, who helps the police decipher a 100-year-old murder mystery. The present-day killer, who carves an archival index number into the bodies of his victims, leads them to a killer in the past. Nigel's job is to find the link between the past and present killings. Waddell's second book has Nigel delving into the Mormon Church.

For those who cannot get enough, I recommend you research three other authors that may be of interest. Chris Larsgaard wrote just one book back in 2000 called The Heir Hunter. In real life the author's business in San Francisco was to track down the heirs to money held by the State of California. The 10% commission reminded me of John D. McDonald's Travis McGee character. Veteran mystery writer Patricia Sprinkle has a series based in Atlanta, beginning with Death on the Family Tree. And K. J. Erickson has his police characters delve into mysteries related to Gettysburg and the Japanese internment during WWII.

For those of us who are addicted to genealogy, it is nice to sit back and let someone else solve all the mysteries. Who knows, the fictional research just might jump-start you into thinking about new sources for your own family tree.

Linda K Murdock is the author of four books, including two cookbooks, a mystery crossword puzzle book and an insider's look at living in Colorado. She has traced her genealogy back ten generations in America and is an avid mystery reader. Learn more about her Mystery Lover's Puzzle Book or read more mystery book reviews at http://bellwetherbooks.com

Posted by Lynnette Phillips at 8:45 AM