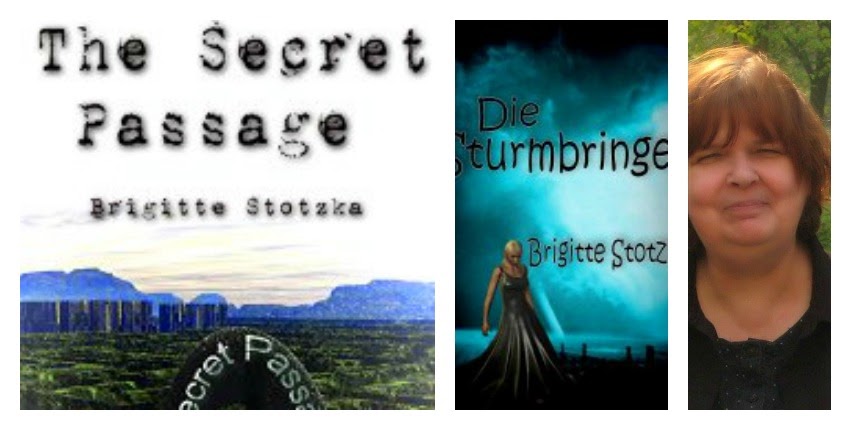 Hi Bigi, It’s wonderful to learn more about you and your writing. I’m so glad we are getting this chance to talk!

According to your Amazon Author’s Page, you were born in Germany and grew up in Australia. With a German background I would guess that you were exposed to a rich world of legend, storytelling and fantasy only to have your world enriched by your time in Australia and their traditions. Is this why you were inspired to write fantasy fiction?

I was four years old when my parents migrated to Australia. I have a brother who is one year younger. I don´t remember anything about the journey there but it was on a ship, I think it was called Castel Felice. We went through the Suez Canal and my mother told me that she could see soldiers on both sides. I don´t know, I can´t remember. Pity. My mother tells me once they left us alone in the cabin while they went on deck but when they came back, we had a little surprise for them. We, my brother and I, had redecorated the cabin. I won´t say with what though. J

My first German book was sent to me by my grandmother, it was Grimms Fairy Tales. I loved it, even if I couldn´t read it at first I treasured it. I have always had a vivid imagination. I used to love writing stories at school, just short stories. Once, when I was fourteen, it was that time of year where exams where being taken. It was in Tasmania, Queenstown and a great number of kids were sitting in the assembly hall at their desks. Between exams we were told to learn but I decided that was way too boring. I wrote pages and pages, a story of a young girl from space, she more or less crash landed on earth, in Australia. She had a terrible weakness; she could not stand the heat. I even managed to complete it and one of the teachers said I should give it to my English teacher, it might have helped with my grades but I said no…….and the story vanished.

I spent many a sleepless night because my brain just did not want to close down. I read a lot, a real bookworm and still am. Only now, I write my own books and I still have sleepless nights. J

The aboriginal culture is fascinating, maybe one of these days I will write a book situated in Australia using this fascinating culture.

Where do I find my inspiration? Everywhere, anywhere….dreams, books, films……..my fantasy just doesn´t know when to stop. JI sometimes spend hours on end trying to sleep but to no avail. When I was little, instead of sleeping I would make up stories in my head, pretend to be a part of a TV series, or just make up something. Fantasy and science fiction were and still are my favourite Genres. At school, at one of the many I visited, I joined a book club. I am an avid reader, was and still am.

·         When did you start writing and sharing your storytelling talents?

Actually, I started writing at school. But the idea of writing books never crossed my mind. About eight or nine years ago, I decided to sit down and try to write a book. I had just written about a page or so when a thought struck me. Who was I to want to do such a thing? How was that possible, to write about someone, their thoughts, feelings? No, not me. So I turned off my words program. A few days later I opened my words again and this time, I stuck to it. My first book was written, The Road to Askabet.

·         You have several more books on Amazon’s German site than on the US site. Are your books being translated to English?

No I don´t, I wanted to but my German is not that good. And I don´t know anyone who would do it for me.

·         Would you tempt us with a synopsis of your latest book; is that Die Sturmbringer?

“Die Sturmbringer” The Storm Bringers.  Rianna Angersforth is a doctor. She works in a hospice for the terminally ill, but only does nightshift. She is a young woman with dreams of her own. She receives a letter from a lawyer asking her to come to America, to New York to be exact. Ticket is included in the letter. She flies.

To her surprise, she finds out an aunt of hers has died and left her a huge sum of money and an island. She can hardly believe her luck. Rianna flies out to this island to find she is the only one, other than a couple of servants, living on this island.

One night, someone breaks into the house but is disturbed by Rianna. She asks her housekeeper to call the police but for some reason, she doesn´t. She confronts her housekeeper with this but she doesn´t get an answer. The next morning, the housekeeper and her husband, the gardener have left the island leaving Rianna on her own. Rianna calls the police but they cannot come immediately so she decides to explore the island to get to know it better. She comes to a wonderful beach at the foot of a cliff. Here she finds a bunch of caves so she begins to explore them. In one of these caves she has a bad accident.

Rianna wakes up, healthy and unharmed on the beach. She hears voices and is surprised to see her best friend has arrived early with the young man she met in Germany and who is also the owner of a small restaurant on a neighbouring island.

Suddenly, that night, they find themselves in danger as a tidal wave threatens them. They find refuge in one of the caves. They wander through these caves trying to find a way out. They eventually find a great underground lake which luckily is not too deep so they wade threw it until they are forced by something in the water to reach dry land. They find themselves in a totally different place. And it is not an island anymore.
There are two people that live here, one of these people are the Storm Bringers?

·         As a final question I like to ask interviewees to make a ‘list of 5 things’. (They’re different for each author.) Would you share 5 of your favorite things with us? [For Example, do you have a favorite writing pen you favor?]

Five of my favourite things.
I probably have tons of favourite things, my cup of coffee in the morning, my tea at night, the smell of fresh grass after mowing, the smell of the air after it has rained on a hot day. My cats as they try to enter my room when I am trying to sleep, my most favourite of all is my granddaughter when she wants to cuddle or when she wakes up in the middle of the night and wants to play Mario. When my father calls over Skype and mum is sitting next to him and we talk for almost an hour.

Wow, we've just touched the surface! I've now got so much more I'd like to talk about; for example, has your granddaughter inspired any stories--do you make any up to tell her at bedtime?

Thank you for taking the time to chat with us today, Bigi.

You can connect with Brigitte Stotzka on Twitter at @Mondfee1 and Facebook
Posted by Lynnette Phillips at 9:00 AM