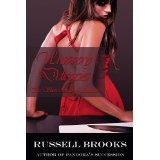 Russell’s BS in Biology gave him a leg up to help write his first thriller novel, Pandora's Succession. He has other novels that are currently in the works and has written a series of Op-Ed style essays that he posts regularly to his blog, some of which have been featured in the Canadian media and on MySpace. He occasionally dashes off a short story and entertains viewers with dramatic readings on The Russell Show, on YouTube. He plays the violin, sings, and works out. He currently lives in Montreal, Quebec.

Posted by Lynnette Phillips at 8:02 AM