Saving libraries San Diego has a lot of them, but it doesn't fund them all that well #savelibraries #libraries 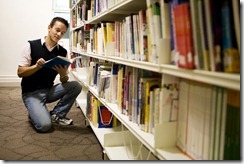 Kevin Faulconer was the first member of the San Diego City Council to seize the “I’m going to save the libraries!” opportunity, the Republican joining forces with the lefty, Ocean Beach-based news and opinion website OBRag.org on a petition drive to stave off a proposed cut in hours at the Ocean Beach branch library.

Within short order, his Democratic colleague, Todd Gloria, announced a plan to reject all of the library hours and staffing cuts proposed citywide by Mayor Jerry Sanders. Gloria was joined by Republican Lorie Zapf and Democrats Tony Young and David Alvarez, each politician lunging to rescue one of the more wholesome services a city offers. Who loves libraries? Everyone but those cold-hearted futurists who say they’re brick-and-mortar relics of a bygone era.

But people still do use libraries. Last week at a City Council hearing, a number of people on the lower rungs of the socioeconomic ladder told heart-rending stories about how important their branch libraries are to them. One woman choked up as she talked about how the city’s library-based literacy program (which needs volunteer tutors, by the way) is saving her life. It was compelling TV for those of us watching at home.

However, that anecdotal evidence must be juxtaposed with numbers. The first number is $56.7 million, which is how much the city has to cut from its budget to be in balance. Sanders has proposed getting $7.4 million of that from the libraries.

The next number is 37,610, which was the number of residents for every library in San Diego the last time statewide statistics were compiled (two years ago). That only means something when compared with other large cities in California, and among those with more than 300,000 residents (Sacramento, Fresno and Bakersfield not reported), only Oakland and San Francisco had more libraries per capita.

Posted by Lynnette Phillips at 10:43 AM