In Indie author/publisher M. Darusha Wehm’s second novel, released in January of 2010, we are introduced to a future world. One where day-to-day life as we now know it doesn’t exist and social activity takes place on the multitude of ‘nets’ and ‘boards’ designed by computer programmers.

Darusha Wehm has cleverly developed complex characters to populate this multifaceted world that is complete with diverse neighborhoods to explore. The first murder in this world has occurred and Ivy Velasquez has contacted Adersson Dexter, Dex, an independent investigator of private claims and concerns, to find out who hated Reuben Cobalt, her other identity, enough to scramble his code.

To protect her real identity, Ivy created Reuben to find new friends and explore this other world in safety. It wasn’t safe for Reuben though. Most employers have a no ‘multi’ (multiple identity) clause in their employment contracts. Ivy needs to find out if Reuben was destroyed because of the multi bigotry that exists or because she knows something dangerous. As one of the Cubicle Men, an underground private security force, Dex has the connections to find out. 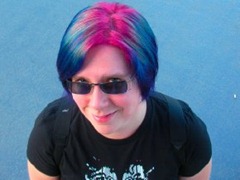 About the Author: Darusha is the author of the Andersson Dexter series of science fiction detective novels Act of Will and Self Made, and the Parsec Award-nominated cyberpunk novel Beautiful Red.  She also writes short stories and non-fiction, some of which can be read free at her website. She is a member of SpecFicNZ and the online writing community #amwriting.

Darusha is from Canada, but has spent the past three years living and sailing on her sailboat, Scream, with her partner Steven. She's in New Zealand now where she's writing short stories and novels for your entertainment.

Posted by Lynnette Phillips at 9:16 AM