I WAS A SEVENTH GRADE MONSTER HUNTER (THE STOKER LEGACY: BOOK ONE) By A.G. Kent #kindle #middlegrade Fun Enthralling 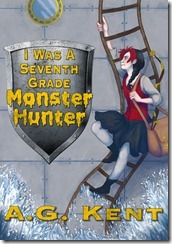 12 year-old Hannah read Grandpa’s note again. What had he been thinking? His letter made her worry even more than before. Maybe he forgot she couldn’t do magic? Who were the allies of mankind and why was she supposed to summon them? She followed the instructions, said the incantation and then waited…and waited. Magic was so much harder than she’d ever thought.

People called Grandpa eccentric; maybe that was why he claimed to come from a long line of monster hunters and why he thought she had ‘skills’. But he always made her feel special – not strange or different – like other people did. So, with the help of the bickering creature crew, she was going to find Grandpa and bring him home.

A.G. Kent has created a story so full of action, strange creatures and peculiar events it makes you wonder how much of this might have been inspired by his own adventures. Whatever the inspiration, the result is an adventure that will keep your favorite ‘tween’ enthralled to the very end.

Before becoming a writer, A.G. Kent led an adventurous life: performing with rock bands, panning for gold in the mountains of Idaho, scuba-diving in the Florida Keys, investigating hauntings in the North Woods, and exploring ghost towns in Arizona. Kent’s expedition to Mt. Everest had to be cancelled when raging yeti made off with the base camp gear. Sales of this book will help mount a new expedition to photograph the shy but very aggressive creatures. So buy two copies, one for you and one for a friend, if you’d like to see what the abominable snowmen really look like!

Available on Amazon Kindle for only $.99 ~ Treat your favorite "’tween’ today!

Posted by Lynnette Phillips at 11:26 AM