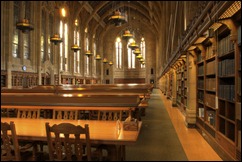 In a decision being hailed by librarians in New York, the Supreme Court of Suffolk County has ruled that libraries are educational institutions. The decision places libraries squarely on the same privileged level as schools and churches when it comes to zoning disputes and may also position them advantageously for future budget battles.

The court declared on May 17 that the East Hampton Library is entitled to expand its children's area without being subject to an environmental review that the local zoning board had been insisting upon. Chartered libraries such as East Hampton "are, indeed, educational uses and as such, serve the same inherently beneficial effects on the community as do schools," and are, therefore, entitled to "the same deferential treatment in zoning and like matters that are accorded to schools and religious institutions," the ruling reads.

Ruling might make lawmakers think differently
"This decision recognizes that libraries are not cultural amenities. They are educational institutions and are an essential public service," said Michael Borges, the executive director of the New York Library Association (NYLA). NYLA filed an amicus brief in the case as did The Suffolk Cooperative Library System, the Library Trustees Association of New York, and the Long Island Library Resource Council.

"This sets us up nicely to work with state policy makers to get them to recognize that libraries deserve the same type of support and recognition that schools get," Borges said. "It recognizes libraries as educational institutions and librarians as educators."

Mary Ellen O'Connor, the president of the Library Trustees Association of New York, agreed that the ruling may enhance the value of libraries in the eyes of lawmakers.

"I was very happy that the decision ran in favor of the library because we are so undervalued in New York, and you can see that from the amount of money that gets cut from libraries every year by the legislature. So, it's a very good first step in really trying to get people to think differently about libraries," she said.

Since the decision is only by one of New York's supreme courts (there is a supreme court in each of New York's 62 counties) and not a federal court, Borges does not think the ruling will have implications beyond New York, but it, nonetheless, has a particular resonance because of growing efforts in places such as Los Angeles to redefine the role of librarians as something less than an educator.

"I don't think there have been a lot of court cases about the definition of libraries as an educational institution in the last ten or 20 years," said Dennis Fabiszak, the director of the East Hampton Library. "Either nobody has challenged it, or, with shrinking library budgets, libraries that have been put into a bad situation didn't have the resources to carry a dispute through to the end," he said.

Posted by Lynnette Phillips at 12:42 PM