The Jenkins of Baltimore ~ A Victorian Romance

A novel that sparkles with rich, Victorian, history. A sweeping saga that builds to an amazing climax as the fate of a dynasties - and its members - are revealed.
Based on a true story of a family whose accomplishments were closely followed by The Baltimore Sun at the turn of the last century.
Discover in these page the long-lost story of the French Canadian Wells sisters, who marry into the Jenkins empire, and die within one day of each other. Their deaths cast a pall on the prominent family for decades, leaving thirteen children motherless - according to obituaries whose typeface now fades with age.
Based on a true story that begins in Baltimore's Northend Belvedere District, and ends in one of the loneliest cemeteries in The South - the Greenwood Cemetery of St. Petersburg, Florida - where Spanish moss hangs from old oak trees and voodoo dolls decorate the landscape.
A narration rich in historical reference and family lore you will remember this epic whether you are a member of the Jenkins family, interested in Baltimore's history, or love Victorian Era romance. Book Trailer ~ Based on the True Story of One of Baltimore's Most Prominent Families 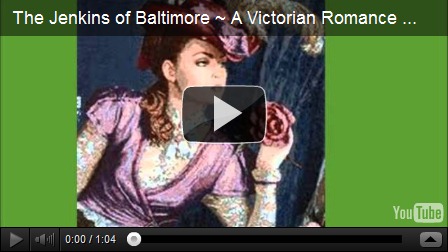 by publisher/novelist Emily Hill
Posted by Lynnette Phillips at 12:01 PM