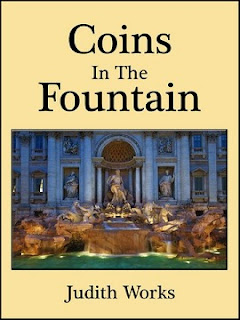 Judith Works, Indie author of Coins In the Fountain, the memoir of the her adventures while living and working in Rome, shares anecdotes from her travels to over 100 different countries.

1. Judith, after completing one career you decided to go to law school, became a traveler and now you’re a writer. Are you enjoying yourself? How are you combining the two?

I hope to keep combining the writer and traveler bit for the next number of years although the time has passed when I would zip off to Zanzibar alone. Yes – I’m enjoying myself, planning travel, packing, looking around for new sights and food experiences, unpacking and writing. Just bought a new suitcase to replace one that wore out. It’s purple. I hope to take it for its maiden voyage to Rome this spring.
Between these activities I’m very busy with volunteer work so there is little time for boredom.

2. You’ve visited over 100 countries. In June you’re adding Ireland, Iceland and Norway to the count. Do you have a favorite country; a favorite part of your traveling adventures that you could share?

Of course my favorite country is Italy but the lure of the new is always there – too many countries and not enough time as the saying goes. My favorite time of every experience is having an afternoon glass of wine and some snacks in a square, piazza, plaza, praça, place or some site where there is an ancient monument just waiting for me to explore.

3. Besides the entertaining tales you share with readers in your memoir, Coins In The Fountain, do you have any amusing anecdotes pertaining to your travels you’d be willing to share with us? Maybe an interaction with a flight attendant, a shop owner in one of the countries you’ve visited or a docent or tour guide encounter.

We hired a guide in Shanghai – a young woman who was a stock broker during the week but worked on the weekends as a guide to practice her English. She wore a beautifully carved dragon pendant. After I admired it she took it off her neck and handed to me for a closer look. She said that it was her good luck charm and that she would never let her clients touch it. Then she added, “Look, no asshole so my luck won’t run out.”

In Morocco I got tangled up with a man with a camel who convinced me that I should take a ride. Glenn was smart enough to refuse after taking a look at the beast. It took days before my flea bites stopped itching. On the same trip one of our traveling companions got caught trying to steal luggage by putting smaller cases inside the largest. He was chased around the shop by the proprietor until he gave up and handed over the luggage.

We had a marvelous tour guide in Egypt but it was April and Ramadan. The temperature was about 120 F, the sands burning hot. Our guide, Zenaib, was showing signs of heat stroke. My husband and I poured our water bottles over her head because she was not allowed a sip until sundown. “Shokran” she said, “thank you.” And then in English: “you have saved my soul.”

An interesting interaction was with a man whose last name is Christian, as in Fletcher Christian the instigator of the mutiny on the Bounty. We were anchored off Pitcairn when the islanders came on the ship because it was too rough for us to get on the tiny island. I had recently come across an article in Vanity Fair about the lengthy trial of 4 island men accused and then convicted of incest and rape. I struck up a conversation with a man who told me that he was a descendant of the original mutineer. When I looked at the article again later I realized that he had just been released from jail after serving his sentence for rape. He had claimed that his activities were based on Polynesian custom and I wondered later if he may have been right but missed the fact that 200 years had passed since the mutiny.

In Otaru, Japan a smiling man came up to us and tried out some sign language which we interpreted as wanting to know how we liked the city. We said “Otaru nice.” He smiled and said “ah” Trying to dredge up another subject we hit on “Ichiro” (the Japanese baseball player in Seattle); our local responded with, “AH”; then we said “Tokyo”; he said “AHH”; finally we tried “Kyoto”; he said, “AHHHHHHH” while bowing practically to the ground and smiling. I guess he was from Kyoto.

One of our most cringing events took place on a cruise. We were seated at dinner with a very dour ship’s doctor and an overbuilt young woman who was with her mother. The mother kept trying to learn about what ships do when someone dies on board and the daughter kept on the lookout for the ship’s photographer. When he started towards us she grabbed her breasts and put them on the table so the photo would show off her greatest assets. We skipped dessert. This was the same cruise where the captain, having had a little too much wine, became overly friendly as he tried to arrange a scarf I was wearing over a rather low cut dress.

4. Having visited so many different countries you must have sampled many different foods. Do you have a favorite cuisine; a least favorite; a food adventure to share?

My favorite cuisine is Italian, especially the myriad kinds of pasta and their associated sauces. My only unpleasant choice was trippa alla fiorintina – tripe Florentine style with a sauce of tomatoes, celery and onions. It tasted like rubber tofu to me. A food mistake I mention in the book was instructive: I never got the word for cauliflower, cavolfiore, mixed with caviar, caviale a second time after reviewing the bill for our delicious dinner.

An especially appealing experience was a simple lunch at a country hotel in Tuscany: we were friends who agreed that it was too lovely to leave the hotel for sightseeing. We asked the owner if we could have lunch under an old olive tree in the garden. Even though the kitchen was closed until dinner he brought out platters of salsiccia, sausage, tomatoes still warm from the garden, grilled peppers and eggplant along with a pitcher of wine made from their own vineyard. Our feast exemplified the reason people love Italy.

Goat stew on the Sudanese border in northern Kenya was interesting for the setting and the company – aid workers but the experience at the Emerson Hotel in Zanzibar has never been equaled. We climbed to the rooftop to lounge on pillows under a silk canopy as the sun set. Mozart was on the CD player. The scent of cinnamon from nearby warehouses filled the air. As we sipped cocktails and started on samosas the bells from a nearby Hindu temple started clanging, then the more mellow bells from the cathedral built over the former slave market rang in an invitation to evensong. Finally a muezzin’s ancient call from the minaret of a nearby mosque floated over the tropical air. The fresh caught grilled fish served with coconut curry over rice completed the idyllic scene.

5. You are working on your first book of fiction. Would you give us a brief synopsis?

I’m working on the plot now – a story of a young couple who move to Rome on a whim and find that expatriate life can have unintended results. I’ll work in some art theft and a few infidelities too. (And no – it’s not autobiographical.)

Read more of Judith's travel adventures on her blog http://alittlelightexercise.blogspot.com/ or visit her website at www.CoinsInTheFountain.com for 'book bites' from Coins In The Fountain

Posted by Lynnette Phillips at 4:36 PM