April Serao's love life is much like a desert, dry, dusty and a little cracked. Six years ago, her husband Sal died while having sex. That was bad, but he was with her, so it could have been worse, however he hadn't finished renovating the kitchen, so it really could have been better.
Now April's raising their three sons alone. Word got around about how Sal met his unfortunate demise which has earned April a "killer good" reputation. Because of it, most men put a considerable amount of distance between her and them. Her mother Marie takes April to see a local celebrity psychic, convinced Sal will talk to them.
April knows Sal hasn't held up his end of a conversation in a long time but goes anyway because her mother is wiry tough, sports Cherry Cola #17 red hair and is a force to be reckoned with. She's also a "Sicilian Guilt Trip" ninja, and April knows she won't win the battle. April works as a Technical Support Engineer at a company called Tin Cup Software.
Her co workers and occasional partners in crime are Rob and Marley. Rob has a hologram perfect family and Marley passes the time by tweezing chin hairs while talking to customers. She lives with a large multicolored parrot named Rodney that she believes is going through teenage angst.
An out of state business associate asks April on her first date since Sal's death and she soon finds herself struggling to balance her past, her children and friends and the possibility of new love. Her life, further complicated by a dead musician, a little latex and a few bad guys becomes a rollicking laugh out loud read that you won't want to miss. 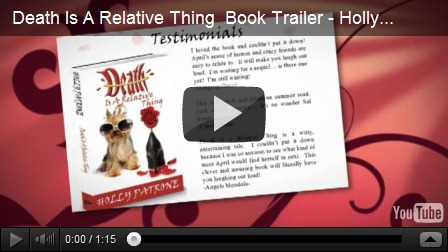 Posted by Lynnette Phillips at 12:27 PM