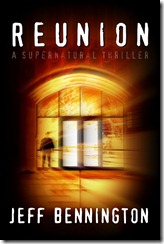 This novel feels so real, so suspenseful, so enigmatic and mind-twisting, something just won’t let you put it down.

Reunion is author Jeff Bennington’s second novel. It is published by Indie publisher nexGate Press with the digital edition available April 1, 2011 and the paperback edition due May 1.

David Ray was thought of as one of the ‘lost ones’. English teacher Steve Gardner wanted to make a difference but he’d only been able to watch David waste away as the system pushed him toward adulthood. Then came the day David finally decided to get even for all the abuse, the teasing and the neglect he’d suffered in his short life and shot Mr. Gardner and eight fellow students killing them and then, in the end, turned the gun on himself.

The surviving and injured students, teachers and townspeople of Crescent Falls, Idaho are still suffering from the trauma of that day twenty years later. The High School was closed and boarded up after the tragedy…it has  just been sitting there decaying and attracting local vandals, a reminder of that gruesome day for the entire town. Now five of the surviving students, although suffering Post Traumatic Stress Disorder, decide to return to Crescent Falls to hold a twentieth class reunion hoping that facing their fears and memories will help in their recovery. On the day of the reunion the Sheriff’s deputy, homemaker, author, therapist and entrepreneur find themselves joined by the former British exchange student who has become a theologist and a parapsychologist and together they enter the school building to face their demons…accompanied also by a dark force.

Jeff Bennington refers to this novel as multi-genre fiction and indeed it has elements of mystery, suspense, the supernatural, horror and even romance. He claims to have been “writing constantly since 2007, without food, water or sleep and I'm on the brink of winning an award for the literary mentally insane…” which would explain his persistent talent. Besides being a writer he is also a husband, dad, runner and drummer.

Besides authoring Reunion he is also the author of Killing the Giants, a political thriller and The Rumblin’, a short story available on Kindle for $.99. For more info about Jeff , Reunion or details on the blog tour he is starting on April 1st, visit his website, http://jeffbennington.com or read his blog, http://thewritingbomb.blogspot.com.

Posted by Lynnette Phillips at 4:43 PM