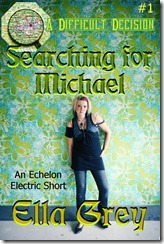 Rachel Valentine is 16. She has just been shuttled off to a St. Mary’s School for Wayward Souls. The nuns are not only very strict, her room spartan and her possessions secreted away in the Mother Superior’s office under lock and key, she gets only an hour of free time every day. She’s spending her free time watching the news when she sees a man behind the reporter in Trafalgar Square she recognizes as her brother who is supposedly dead.

No one will believe Michael is alive and in London so since you don’t end up in a boarding school for wayward souls by being a good girl Rachel hatches an escape plan. Now she’s spending her days circulating Michael’s photo looking for someone who’s seen him but she finds out there’s something very strange going on, the list of missing person’s is growing and she’s right in the middle of the danger.

Searching for Michael is Ella Grey’s second eshort story published by Echelon Press as part of a project to tempt reluctant young readers. The story is written in short installments and ends in a cliffhanger in the hope of enticing the reader to read the next installment.

Ella Grey lives with her husband, son and dog. Her first eshort published by Echelon Press was released last year. To find out more about Ella Grey, her stories and books visit her at http://ellagrey.wordpress.com/