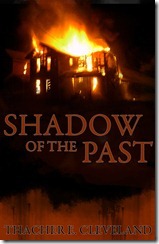 I started writing Shadow of the Past when I was in high school. Needless to say that was a while ago, and the book went through a variety of changes and drafts (including having to start completely from scratch thanks to a bad disk) since then. As in most first novels, there was a lot of me in, Mark Watson, the main character. The book went through draft after draft and change after change and as I gained more perspective on life I realized what I was really writing about. Sure, it’s got the spirit of a killer covered in smoke and fire wielding a sword cane and picking off Mark’s nearest and dearest, but that wasn’t what it was really about. It’s about feeling helpless and hopeless and overcoming that feeling. At the start of the book Mark is convinced that he’s going to be trapped where he is forever and that’s exactly where the Shadow Man hunting Mark wants him. This is about how Mark learns to confront that feeling and fight through it.

That trapped feeling isn’t just something that teenagers feel. I know I’ve felt it at other times later in life, so when people told me that maybe I should pull back some of the horror elements and adult language and make this more of a Young Adult novel I didn’t listen (despite how popular YA horror is; I may not be smart but at least I’m stubborn). I’m far beyond my teenage years, but I remember me and my peer’s juvenile crassness, and when it comes to the horror...well, it is a horror novel and I like my monsters to be, well...monstrous (although there’s no need for the graphic violence of the Saw and Hostel franchises). It’s not horror if it doesn’t get you right in the guts every once and a while.

It became clear once I started looking for agents to represent the book that Shadow of the Past was in a middle-ground area that was going to give traditional publishing a pause. I didn’t want to change the central conceit of the book too much, so I decided to pursue digitally self-publishing. Thus far it’s been very rewarding and I’ve gotten a lot of support from folks. I’m glad I haven’t had to compromise anything, because I honestly believe that Mark’s self-doubt and worries about the future are things that never really leave us, but instead become “Where am I going?” “Am I going to stay in this job forever?” “Am I ever going to do what I really wanted to do with my life?” as we get older. Throw in some murder, some mystery and the turbulence of first love, and you have Shadow of the Past. I hope folks have as much fun with it as I did writing it.
*****
Thacher E. Cleveland grew up in Montclair, NJ which is totally nothing like Cedar Ridge. Honest. He moved to Yellow Springs, Ohio after school and stayed for about 15 years, selling books and comics for most of that time, even becoming a co-founder his own shop, Super-Fly Comics & Games. In 2010 he left the retail side of life and relocated to Chicago. Thacher is a contributing writer and columnist for the website Panels on Pages.com and is one of the hosts of the Super-Fly Comics Podcast on the Panels on Pages podcast network. He can be found online at his website, www.demonweasel.com or via Twitter at www.twitter.com/demonweasel.

Posted by Lynnette Phillips at 8:06 AM