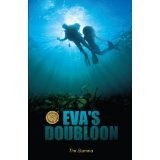 How would you describe Eva’s Doubloon? (Fantasy, adventure…)

Eva’s Doubloon is best described as a thriller, though it starts out as a mystery, ends as an adventure, and has an element of fantasy in between. Of course, its underlying romance evolves from beginning to end. When the manuscript was approved to be published, the woman with Outskirts Publishing that approved it told me the story read like a movie in her mind. That made me feel good about the writing, because as it was being written, that’s exactly how I saw it.

Could you give your readers a brief synopsis of the book?

The book’s main character is Ethan, a widower with a growing internet business that he and his deceased wife had started. Before she died, they originally had plans to move near some friends in the Bahamas on a remote island they often vacationed at called Mayaguana. Before Maggie (his wife) dies, she encourages him to go on as planned. Seeking solitude to grieve the loss of his wife, he buys a strip of land on the southeast point, the most isolated and finds out he’s not alone. Mysterious women lying around in shallow water make him feel unwelcome with one actually sabotaging Ethan’s attempts to scuba dive. Finally attacked, Ethan’s reality is redefined as he finds out that mermaids are very much real. Running parallel to the story is a growing relationship between him and Mia, an abused woman seeking shelter after her boyfriend’s boat stops by the island. When a certain mermaid named Eva tries to make amends for the loss of his fishing boat, her compensation, a rare Brasher doubloon, ends up putting Ethan and Mia in even more danger. The story involves imperfect people, healing and second chances, all in a setting anyone would call paradise.

With the book being set in the Bahamas, I have to wonder if you have spent much time there? I know one of your passions is scuba diving. Have you spent any time exploring shipwrecks?

In the Bahamas on Andros Island is a Naval facility called AUTEC. As an aircrewman aboard the Seahawk helicopters, we would train there periodically in tracking and attacking simulated submarines. After our scheduled flights, the beach was ours. And because that part of the island was remote, the sea life is phenomenal. AUTEC is where I get most of my mental images for the scuba diving scenes in the story. I’ve dived around Florida, a little in Greece, and some in the Persian Gulf. Also in Missouri at Table Rock Lake and Bonne Terre, Missouri in an old underground lead mine (ranked number 10 out of 100 best dives in the U.S.). One of the best shipwrecks I ever dove was in the Persian Gulf, though. The friend I dove with had dive lights. While everyone else was around the wreck, we went in, down a long corridor, shining our lights into the dark rooms. The Persian Gulf surprised me. It was some of the most beautiful water I’ve ever dived in.

What inspired you to write this book--In other words what goals for this book did you have in mind when you took pen in hand, so to speak?

I really don’t consider myself a writer. Anyone that’s watched the Oscar’s lately can tell that Hollywood is running out of ideas. Especially with all the ‘remakes’. It was a slow couple of months at Redbox, plus my daughter playing with her ‘barbie-sized’ Ariel doll, and the lack of any stories out there like Eva’s Doubloon that finally got it done. But like I said, I’m not a writer, so it wasn’t until I started losing sleep over all these ideas hitting me that made me eventually sit down and start writing out chapter summaries. Surprised and having liked what I read, I teased myself into attempting chapter one. If I found that I couldn’t do it, I would be done with all of the nonsense. Four chapters later, the words just poured onto the monitor until my wife finally had to ask what I was doing. Because mermaid stories aren’t the most ‘manliest thing’ to write about, I was reluctant to tell her, but did. I think she laughed, until she read the first chapter. My objective was to make the story real – maybe even believable. The lady that approved the manuscript told me that, at first, she thought she was reading a memoir, complimenting my writing style. Until then, I didn’t even know I had one. Eva’s Doubloon is a story that is original. That’s what kept me awake at night until the plots and ideas were written down to later be incorporated into the story.

Did you do any research into shipwrecks or valuable coins while writing Eva’s Doubloon?

In writing the book, I chose Mayaguana as a setting due to it being so remote and sparsely populated. Spanish ships full of treasure really did sail past the island centuries ago, with it being the last sight of land before crossing the Atlantic. There really are rare Brasher doubloons, with the history I wrote in the book being accurate. Ephraim Brasher knew George Washington personally, and wanted his coin to be the first coin of the Republic. And, yes, one of the seven known Brasher doubloons really did sell for just under three million dollars. Lucayans really were the original natives to Mayaguana before Columbus discovered them and they were taken away as slaves. I learned several things about that part of the world that I wouldn’t have discovered if I didn’t write Eva’s Doubloon. The stories of mermaids go way back, all the way back to Alexander the Great, so there was obviously more there than just mistaken manatees. I’m definitely not the first sailor to deliver a mermaid tale, and I’m sure I won’t be the last. As someone who loves scuba diving, to write about any other mythical creature just wouldn’t seem right.

Do you have another novel in the works?

After finishing Eva’s Doubloon, having developed the characters, the book really introduces another world – one among our own, that’s hard to leave. Writing it was almost an escape – a vacation without having to leave home. A friend asked if I thought about doing a sequel. I reminded him that I’m not a writer. But afterwards, more ideas hit me and with the groundwork for the characters and setting already taken care of, the sequel is finished and on my computer. With it dove-tailing with the original story nicely, I like it even more, with more about the characters getting discovered. In the first book, Ethan is told that the mermaid’s treasure chamber in one of the caves is off limits. In the second book, with the cave being found by surveyors and divers going in regardless of Ethan’s warnings, Ethan insists on seeing what other divers died over, testing some of his own relationships in the process.

Tim, you make me wish I had learned to dive!  Thank you for taking the time to talk with us.

Posted by Lynnette Phillips at 2:01 PM