#Enjoy This Delightful Excerpt from ‘BUZZ’ by Steve Chicoine, His New #YoungAdult Novel 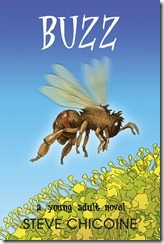 A sweet voice said, “Welcome to Quik Stop.” His eyes fell on a girl behind the counter. She had dazzling, brown eyes set in olive skin with black hair down to her shoulders. Matt froze for a moment. That girl is fine. He mumbled something, which made no sense. Frustrated, he fled down an aisle to stare into the cooler at the far end of the aisle, his mind a blank. What did I come for? What was it? Oh, yeah … sour cream.

Matt opened the cooler door and felt a blast of cool air. “That’s what I’m talking about,” Matt moaned. He pushed his body as far in as he could and took a deep breath. Then he turned around to see the dark-haired beauty watching him with interest. She laughed when their eyes met. He blushed and extracted himself from the cooler. Matt reached for a container of sour cream and let the door slam shut. She was still looking at him. As he walked down the aisle, his mind stumbled through the options of what he might say to her. He grabbed a candy bar and put it on the counter with the sour cream.

“Is that all?” she asked as she rang up the items.

“What? Oh, you think? Could be a lot hotter this time of year.” She played with a small cross hanging from her neck by a thin gold chain.

Gotta say something sophisticated and cool. “So what’s the beer everyone drinks down here anyway?”

The beauty did not smile. “You’re too young.”

Matt jumped. She’s sure all up in my business. “Yeah, I was just curious.”

Just as Matt was deciding that she was not approachable or interested, she said, “What’s the sour cream for?”

Matt fumbled about in his mind, trying to remember. “I don’t know.” He laughed out loud at himself. “Tomatoes something?” That gonna impress her?

“Yeah, yeah, that’s it. Whatever those are.”

“Tomatillos? They look like little green tomatoes, a couple of inches across, but they are very tart and grow wrapped in a little papery husk. I grow them and make a special salsa verde from them.” She grinned, flashly beautiful white teeth. “You’re not from around here, are you?”

Matt threw up his hands in surrender. “You noticed, huh?”

“The way you dress. The way you talk … you know.” She laughed causing Matt to flush.

She pressed the matter with him. “Where you from?”

“Chicago. Here for the summer. Staying with my aunt.”

“Hmmm. Long way from home. You eat a lot of Mexican food in Chicago?”

Matt shrugged, giving her an apologetic look. “My mom doesn’t cook much.” He crossed his arms, feeling self-conscious. “Hardly ever, actually.” He grinned sheepishly.

The girl rang up the item. “Well, I hope your aunt knows how to make enchiladas.” I’d pay money to be able to just sit here and listen to her flow that word “enchiladas” over and over in that sexy accent.

“I’m sure your enchiladas are better than my Aunt LeeNell’s. She’s … umm … Anglo.”

“Ahh!” she said. “Then you haven’t had real enchiladas. You’ll have to try mine sometime.”

A broad grin spread across her face. “Maybe someday,” she said. “Three eighty-two.”

The way she looked at him with those amazing eyes disoriented Matt. “Sorry?”

“Oh, yeah, yeah, the sour cream.” Matt dug into his pocket, fumbled around and pulled out a twenty. Like I ever have something that big. He started to toss the bill on the counter, but caught himself. He smiled at the pretty clerk and then pressed the bill into her hand. “Here you go.” He held his breath and made eye contact as their hands touched ever so briefly. Did I just see her eyes respond to the touch?

She rang up the sale on the register and counted out his change. Matt paid no attention to the math. “Gracias,” she said with a big smile.

Matt nodded and said, “Bye.” He turned and headed for the door.

Matt stopped at the door and turned around. “What?”

“My name’s Maria,” she said. She was leaning over the counter and peering around a display that blocked their view.

“I’m Matt. Nice to meet you.” He stood at the door for a few more moments.

Thank you Steve, I like the flow & pace of the words, how they convey what is happening and the dialogue between Matt and Maria.

Get your copy of BUZZ available in paperback and in e-book formats through www.indigotreepublishing.com.

Posted by Lynnette Phillips at 10:46 AM

Email ThisBlogThis!Share to TwitterShare to FacebookShare to Pinterest
Labels: Excerpt