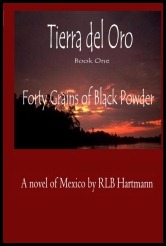 Most locals know her as Lucille Bollinger, but to those who read her novels, the name is RLB Hartmann.
Hartmann said writing first appealed to her while walking home from school in the third grade.

“An older school chum read a story she wrote for her class. I wanted to do that,” she said. “My maternal grandmother had told me stories all my life, so the seed was already there.”
Hartmann credits living with grownups, who read adult versions of  Bambiby Felix Salten and Black Beauty by Anna Sewell to her, as early training for her writing.

Vocabulary and English skills were already well developed as early as the first grade and she jokes, "I was happy with my high marks on my report card, but had to ask my mom what 'vocabulary' meant."
“I always saw what my dad called ‘little pictures’ in my head. It was a logical step to transition from hearing and reading stories, to writing them,” Hartmann said. “The first story I remember writing was set on the windy plains of some northwestern state, with a horse named Keno as the main character.”

Horses seem to be a trademark of sorts for this local writer. As a young girl, her family moved from Morganton to the Oak Hill area where she became known to classmates as “the girl who drew.”
“Interestingly enough, in the Tierra series, the male characters all have a mystical connection with horses,” Hartmann said.

In high school, she wrote parts of three novels finishing only one that she still keeps in a drawer.

While she was majoring in English and education at Appalachian State, her writing was mostly term papers, but reading fiction remained a large part of her life. A class assignment produced her first real short story. “I remember writing it the morning before it was due, and ripping the final page out of my typewriter just before heading out to class.  That story was ‘Tyler’ which was later published in Far West Magazine.  The check was hefty and convinced me that I was a writer.”

She credits her claim to fame to “I Rode with Cullen Baker,” a story based on a notorious outlaw who terrorized East Texas during and after the War Between the States. In 2001, the feature-length screenplay version won the Split-Screenplay $1000 First Prize. This novel, as well as the “Tierra del Oro” series, are all historical fiction.

While teaching a course called “Literature of the American West,” which she designed for classes at Gamewell-Colletsville High School, a student with an old western magazine and a visiting professor from Oklahoma created a spark which ignited the series. “A visiting professor who came from Oklahoma used the phrase ‘40 grains of black powder.’ I liked the sound of that and dutifully wrote it down in my notebook, having no clue that it would become a nine book saga set in a country I had visited three years earlier on a whirlwind trip — and not a minute spent on the west coast where my characters live,” Hartmann said.

Tierra del Oro covers four generations of the Cordero family, from 1870 until 1920, when General Obregón comes to power. “Tierra del Oro” means “Land of the Gold.”

“To tell everyone’s story required nine books,” she said. Each novel focuses on a main character and his or her conflicts, and all the major characters face challenges from treacherous and dangerous sources.

To learn more about this series, go to www.rlbhartmann.com  where the 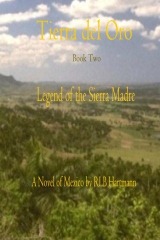 link "Stories" leads to descriptions and photos illustrating all 9 novels.  Links on the front page also take readers to a secure shopping cart for ordering the first two titles, Forty Grains of Black Powder and Legend of the Sierra Madre.

Book three, Los Pobres, is due to launch mid-November, with others following at three-month intervals until the whole saga concludes with Tesoro, which means “Treasure.”

Hartmann encourages readers to buy these titles using links at the website, then to post reviews at Amazon.com.

Another historical novel, “The Brackettville Horses” is due out in the spring of 2012. More about that will be posted on Hartmann's website and on Face Book and Twitter.

Previous works include her first two books published through Lulu.com in 2005, Floyd and the Traveling Yard Sale, and I Rode with Cullen Baker, which are available in print at http://www.lulu.com/spotlight/worksbyrlbh

A somewhat altered version of this interview appeared in the Morganton NC Sunday edition of The News Herald,  Tracy Farnham's weekly summer reading series with a spotlight on local authors pen page turners.  ("Gab" section on 9/11/2011).

Posted by Lynnette Phillips at 4:38 PM