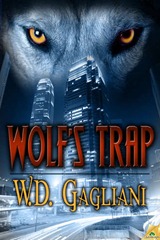 W. D. Gagliani is the award winning author of “north woods noirs” and other horror-thrillers. He is also A member of horror writers association (HWA) , international thriller writers (ITW) and the authors guild and has also taught creative writing and composition at the college level. He was raised in Genova, Italy and Kenosha, Wisconsin and now lives in Milwaukee.

His most recent novel, Wolf’s Edge, is number four in the Nick Lupo, werewolf/police detective series. He’s here today to share a bit about nick with us! 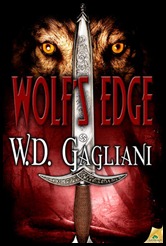 Q: Can you tell us what inspired you to create a series based on a werewolf?

I looked around years ago and everything was vampires, everywhere. Zombies were on their way up, but still far from gaining today's acceptance. I saw that my favorite of the classic monsters wasn't being used much. I decided to change that. It took me nine years to finish the book. In fact, by the time I was finished writing Wolf's Trap, there were plenty of werewolves showing up in paranormal romance thrillers and the occasional erotica piece. The werewolf gained popularity in the 2000s, just as I was publishing it. I always keenly felt the tragic quality of Talbot, the man who didn't want to be a monster. Vampires tended to enjoy their monstrous qualities, but Talbot didn't. I put that mentality together with some of my influences, and the germ of an idea was born. Four books later, I guess something caught on… something struck a chord with some readers. I get plenty of mail thanking me for dealing with werewolves! Other writers scrambled to fill the void when I didn't have a sequel ready to go right when it was requested. Having Wolf's Trap turn into a series surprised me the most, because that hadn’t been my plan at all!

Q: What was the biggest challenge Nick overcame to become a police detective?

I don't really deal with Lupo's days at the academy, but his "condition" was difficult for him to accept at first, and then nearly impossible to control. Even though it gave him some advantages, he struggled with the day to day problems of having to wolf out, which was what led him to seek a place where he could hunt in peace – Wisconsin's North Woods, where he rented a cottage from Jessie Hawkins, who would become his girlfriend in the future and share the dangers of his cases. But before Jessie, there was Caroline Stewart, who encouraged Lupo to become a cop and experiment with his powers. It led to her death. Caroline, a psychiatrist and psychology professor (and his lover) encouraged him to experiment with his control issues, but she went too far. Lupo went on to become a good cop, but his murder of Caroline Stewart was never solved and endured as a black eye for the PD. Lupo expects that someday it’ll come back to bite him…

Q: Was there any research necessary for the Nick Lupo stories, say an interview with a crypto zoologist maybe?

No, I am mostly a book-based researcher! I tend to gloss over the DNA aspects, but I have mentioned them in both Wolf's Gambit and Wolf's Bluff. I tend to stick with fast and furious action and so coroner's reports get labeled "errors" because of the discrepancies. I don't want to get too lost in procedure. Lupo is a gut-driven cop who follows his hunches, so I wanted to keep the books moving as quickly as he does. It also plays up his human side, the fact that he’s impulsive. In fact, he’s probably following his wolf side but doesn’t quite know it. Over the series, he’s starting to realize he can be in more control, but the power may be going to his head (even if he wouldn’t admit it). The closer to the wolf Lupo gets, the more dangerous he becomes…

I do, however, tend to research other aspects, such as gun use. I’m fairly well acquainted with guns of all types, and in fact I’ve always been a rather instinctive good shot. While in college, I did a brief stint in ROTC where I shot indoors in competitive settings (though not in actual competition, except for grades!). I’ve shot black powder guns, revolvers, shotguns, semi-auto handguns to a lesser extent, and now thanks to a recent convention trip, I was also able to add full-auto to my repertoire by trying out a modern H&K MP5 submachine gun with a laser sight and a classic World War 2 MP-40 Schmeisser submachine gun. I try to get all my gun and weapons facts right. I collect odd little trinkets, such as blowguns and edged weapons of all kinds including a PVC knife. When a crossbow figured heavily in Wolf’s Trap, I made sure I had one just like it and knew how to load and shoot it. I’m more likely to do that kind of research, along with geography of settings and history, than I am anything heavily scientific. It’s just to keep the pace hopping.

Q: What was the most fun time during the writing? Do you have any anecdotes you can share with the readers?

I always enjoy when characters claim their own destinies and step off the page, surprising even me with their behavior – their survival when they were slated to die, or vice versa. Characters who don't listen to their creator are the best thing that can happen to a writer, because if you're surprised by them, then hopefully the reader will be, too. I love when that happens, and it has happened to me at least once in every book. This is also why I leave so many gaps in my outlines, allowing characters and events to change direction as needed for their own story arcs. This is always the most fun I can have. Well, that and maybe while writing a sex scene, LOL…

Q: Part of your childhood was spent in Italy. How old were you during that time? What did you enjoy doing there?

I left Italy at the age of eight. I spoke Italian before English. I was just a little kid the whole time I was there, but I enjoyed seeing the ships in Genova's huge harbor. And I enjoyed reading – I started pretty early, before my fourth birthday. It was something I've never stopped loving, or doing. I knew as soon as I started reading kid-style fantasy, and later Jules Verne’s prescient science fiction, that I wanted to be a storyteller over anything in the whole world. In my eight years in Italy I also enjoyed riding trains… and going to movies. Even at that young age, my parents didn’t censor anything I was interested in and in fact took me to see things such as the James Bond movie “Goldfinger” (dubbed in Italian) when I was barely five. It made quite an impression on me, and turned me into a life-long Ian Fleming fan. I do remember enjoying the feel of the big, ancient city of Genova, as a kid. There are medieval buildings all over for a kid to fall in love with! And I remember the Mediterranean being very, very blue… and warm.

Thanks for taking the time to talk with us today, Bill!

You can find more about Nick Lupo, North Woods Noir and W. D. Gagliani at www.wdgagliani.com. These and other W.D. Gagliani books can be found on Amazon.com.

Posted by Lynnette Phillips at 10:34 AM